Good Robot Brewing - A Piece of Ottawa On the East Coast 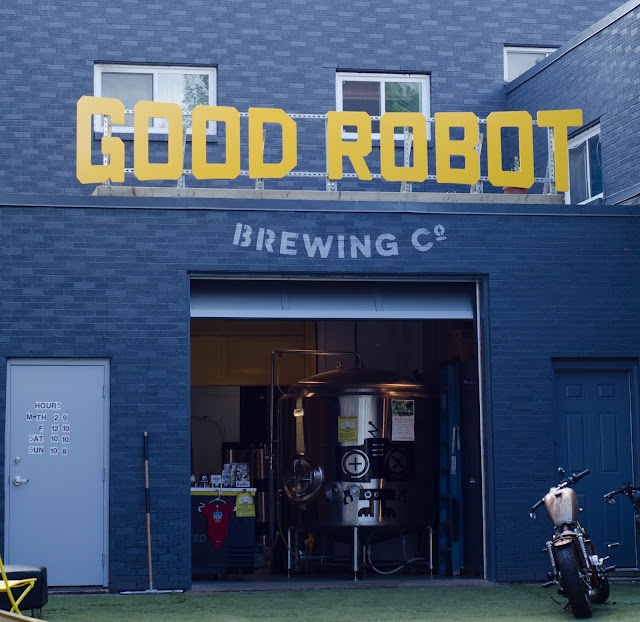 Nova Scotia is possibly my favourite place in Canada (granted, I haven't been to the West coast in about 14 years). I spent a weekend in Halifax recently, and stumbled upon some of the newer breweries in the city. There is a lot of great new stuff coming out of Halifax on the Craft Beer front, but the brewery that stood out the most was definitely Good Robot Brewing Co (GRBC). The beer is amazing, the guys running the show are cool - and obviously huge geeks (which is great) - and the atmosphere is second to none. Allow me to paint a picture:

You walk past what used to be an old garage recessed back off of Robie Street, and you notice that it is most definitely no longer a garage. First of all, there is an astroturf lawn out front with a couch and bean bag throwing game set out so that as a prospective customer you don't feel rushed by walking into a store front that may be overcrowded, getting served, and then feeling awkward like you need to leave. You can just chill outside so that others can get in for a taste. When you roll up to the entrance there is a giant (30bbl) bright tank sporting the Good Robot logo. Conversation starter? Probably. The brewery is also pretty open concept, so you can rubberneck and check out the fermenters, brew kettle, malt mill, and mash tun. If you show interest, one of the guys will likely bring you back to the brewery and regale you with their origin story and tell you about the brewing process.

That brings me to the guys in charge. These guys met at Dalhousie University while getting degrees in Engineering. They parted ways after school to become, well, engineers. From what I heard from Josh and read on the Web site, engineering got dull, and the guys all reunited to start Good Robot. A pretty awe inspiring tale, if I've ever heard one! Josh was our host for most of Friday night, and he is from Ottawa. That's pretty neat. Josh is the director of marketing for Good Robot, and he does most of the social media stuff, from what I'm told. Doug is the head brewer, and Angus is the company's president. You can get the full bio for each of the founders on the Good Robot Web site. From what I saw, everybody brews, which is not only cool, but practical. Even Kira, who was working the counter the second time I came in, will be learning to brew. Seems like a pretty sweet gig to me.

Last, but definitely not least, is the beer. When I went to the brewery the first time, they had a trio on tap: A steam beer dubbed Crown on the Ground, a Gose, aptly named Goseface Killah, and an American Pale Ale known as the Burban Legend. Luckily, on the second trip there was also a stout. And oh, what a stout it was. Tom Waits for No One is the name, and it's delicious. Great chocolate and coffee flavours, but with the added smoothness that I think was added by a little bit of nitro, although the mouthfeel could come from the 7.9% ABV! Come to think of it, each of these brews was pretty amazing. The Burban Legend is hopped with my favourite - Falconer's Flight, and is a vey well balanced APA. You don't see many people brewing a Gose these days, but GRB nailed it. It's refreshing, but still pleasantly salty. The steam beer was interesting, not just because it wasn't called "California Common", but because of the subtle spice of rye malt that is used in the recipe. Four great beers, five measly bucks, not a bad deal at all!

The next step for GRBC is to open their own tap house. They are currently renovating a piece of their building which was not part of the brewery in order to get their very own licensed tap house in which to serve their beers. It seems like there are some exciting times ahead for Good Robot Brewing Co., and for the Halifax craft beer scene as a whole. I'm excited about the prospect of coming back out to Canada's east coast and finding the GRBC tap room in full swing. There are great people running this brewery, and I definitely recommend stopping by if you're ever in Halifax!