I recently took a beer that I had left in a box for four years to a friend's house. We opened it, wondering what it would taste like. It was a very nice, pricey hopfenweiss, and I had really hoped it would hold up - although I expected some serious off-flavours. My hopes were dashed as we poured some into our glasses and I saw the floaties. Yes, bottle conditioned beer is great, but this was funky. We deemed it undrinkable, after two sips each (since, you know, you have to go back for seconds just in case it wasn't as bad as you thought after the first sip). Sad day. 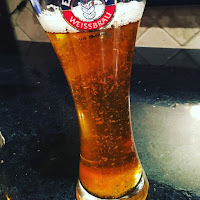 Where did I go wrong? Well, first, I didn't necessarily intend to age this beer - especially not for four years. It was only 6% ABV, and it was a hopfenweiss. And, to be honest, the temperature at which I "aged" this beer was never really stable - and usually on the warm side - due to moving three times and not always having correct storage. From this tale of woe, however, comes a great lesson in aging beer. If you want to age your beer, and avoid making my mistakes, read on to see how I could have taken better care of this brew, and how you can age beer without turning it into an off-flavoured nightmare.

Why age beer in the first place?

I was once told "you can't age beer, it's not wine!" I beg to differ, and I know some beer lovers who also age their beer. But why age beer when brewers make it to drink fresh? Well, I like my beer fresh as well, but I generally buy more than one bottle in order to enjoy it fresh, as well as keep one or more for aging. There are two reasons behind this madness: First, some brews are simply too "hot" or alcoholic. Maybe you like it boozy, but sometimes I find it to be a bit much. Keeping a beer in a cool, dark place for a month, a year, or... four years, can help a hot, boozy mess mellow out.

The second reason I would age a beer is simply to see how it ages. Some beers, such as those that are bottle conditioned (meaning there is yeast left in - or added to - the bottle), will become more complex over time, while a super hoppy beer may become more balanced. Over time, the beer will generally taste different. Sometimes it will add new character to the beer, sometimes it will take away elements that you previously found unpleasant, renewing your faith in the brew. Yes, it can result in waste, but if you follow a few simple rules, you can use the aging - or cellaring - process to develop a great tasting experience. These guidelines revolve around three factors - alcohol by volume, hop bitterness, and temperature, and enable you to cellar your beer like a champ.

Alcohol, the product of yeast and sugar, is a natural preservative in beer. It stands to reason, then, that boozier beers such as imperial stouts or Belgian Trippels are generally great for aging. When you're considering aging a brew, you want to ensure that you're aging a boozy enough number that it will stay fresh for the desired duration in the cellar. Booze is not the only factor, however, as I have had a Boulder Brewing Co. Chocolate Shake porter (only 5.9% ABV) a year past the "drink by" date - so probably around 18 months - and it was still insanely delicious. So, while ABV is one of the main factors, there are two more that you need to take into consideration when you cellar a bottle of beer.

Like alcohol, hops act as a natural preservative in beer. The beloved IPA even came to being because beer needed to last the trip from the docks of London, England to India. The main characteristic of the IPA is its intense hoppiness, which was derived from the use of hops as a preservative. Here's the catch when it comes to aging hoppy beers, though: as the beer ages, the hop characteristics fade as the alpha acids are diluted in the beer. The beer will remain good, but the hoppy goodness will fade and you will end up with a rather malty - or in some cases insanely well balanced - beer. This is why IPAs - such as Beyond The Pale's Aromatherapy - or other hoppy brews are best imbibed fresh.

First of all, you want to keep your aged brews at a consistent temperature. Even if you are aging a highly alcoholic beer with lots of hoppy goodness, fluctuations in temperature can make for a dicey tasting experience. As a rule of thumb, you probably don't want to store your beer above 60° Fahrenheit, regardless of the brew. In my experience, a warm-aged beer becomes a fine vinegar, given enough time. A bigger beer - Something like a Belgian Trippel, let's say - will generally be happy at a higher temperature, but again, keep it below 60°! Beers such as robust porters (such as my Chocolate Shake example above) or Bock should be kept a bit colder, say 55°F, as they do not have as much alcohol to act as a preservative. Your smaller beers - lagers or wheat beers, for instance - are best aged at fridge temperature, being somewhere around 45°F. In short, bigger beers can take some heat, smaller beers should be kept colder. Pro tip: if you are storing your beer at super cold temperature, let it warm up before you taste it. Tasting too cold can eliminate some of the finer characteristics of the brew, taking away from the tasting experience. Lastly, although it isn't directly related to temperature, light plays a factor as well. For the love of all things holy, keep your beer away from direct sunlight and other sources of UV light, lest your beer go the way of the skunk. Store your brews in a cool, dark place.

While nothing lasts forever, your beer can age at cellar temperature for a very long time. For instance, when the LCBO sold six-packs of Westvleteren 12, I managed to get my hands on one. I still have three left, five years later, and they only get more complex and delicious over time. The best way to age beer is to buy at least two. One for immediate consumption, one to age for a year, and one to age for longer than a year. The best part about aging a beer is to note the changes over time. One of my favourite tastings consisted of Beyond The Pale's "The Darkerness", Amsterdam's Tempest, and my own imperial stout - dubbed "The Czar". Having a new sample of each, and bottles from the previous two years made for a great tasting. Add some dark chocolate, a variety of cured meats, and some sharp cheese, and you've got yourself a party. The big thing to remember about aging beer is that you
aren't simply keeping a brew around to consume at a later date - this beer will not taste the same after a year.

Aging beer is fun, if somewhat addictive. To reiterate, the main factors in aging beer are alcohol by volume (ABV), hop content measured in IBUs, and the temperature at which you will be storing your beers. If you want to start keeping some beer over time, the first thing you will need is a logbook of sorts. Record dates and times in order to determine optimal aging cycles. I also recommend getting a beer fridge, but if you have a crawlspace that stays somewhat cool, that can also be an option for most bigger brews. If you are going to age a beer, you should get more than one bottle, as you should try it fresh as a basis for comparison later on. Lastly, don't forget to enjoy the tasting! Have some friends over, try the beer from multiple years, and don't forget to add some tasty treats to pair with your aged goodness! Hopefully these tips help you avoid common pitfalls and make the best of the beer cellaring process!
at July 07, 2017 No comments: