The Cheshire Cat: A Diamond in the Rough

A while ago, in a course I took on beer appreciation, several students - and the teacher - mentioned a pub called The Cheshire Cat, located in an old school house in Carp, Ontario. A pub named after one of the most enigmatic character in Lewis Carroll's "Alice's Adventure in Wonderland" was certainly intriguing. The recommendation from the beer prof and several of the students was enough to tempt us into driving 23km for dinner and drinks.

When we arrived, it was busy! A busy pub is generally busy for a reason, so this was definitely not disheartening, especially since there was room for two more. The clean, rustic interior is cozy, with its dim (but not too dim) lighting and classic wood furniture providing a welcoming atmosphere, and so do the serving staff. Everyone is very courteous and the service is top notch.

After our first dinner at "The Cat", we decided that it was definitely not our last. At our second dinner last week, I managed to take a few notes and some photos to provide some insight into the delicious food and drink served at The Cheshire Cat.

Let's start with the beer. On my first trip, I had a pint of "Long Shot White" ale, by Ottawa's own Broad Head Brewery to start, and a Guinness with my Hot Beef & Yorkie Platter (which was delicious!). While I don't have full tasting notes on the Long Shot White, it's officially on my list! The beer was tasty and refreshing, a great precursor to the hearty meal.
On my second date at The Cat, I had Spearhead Brewery's Moroccan Brown Ale. For this beer I did take some notes. On the nose, this brew definitely shows some booze (it weights in at 6.0% ABV), chocolate, molasses, dried stone fruit such as dried plum, fig, or apricot, and raw malts. The flavour mimics the nose, and the finish is pretty short and mainly boozy with some molasses. The beer is smooth and sweet on the palate, which worked well to balance out the salt in my main course: Cottage Pie.

Now for the food. I had the Cottage Pie, which consists of ground beef mixed with garlic, corn and onions, with a delicious layer of mashed potatoes smothered in cheese, with a side of gravy. The gravy is amazing at this place, let me tell you. This dish comes with seasonal vegetables, in this case carrots, broccoli, cauliflower, and parsnip. Let me just say it hit the spot. My girlfriend had the Ploughman's Lunch, and it was pretty amazing. There was chutney, summer sausage, ham, fresh fruit, three different types of bread, several different cheeses, pickled beets and onions, and apple compote. It's listed under starters, but as you can see, it's a serious meal. The food is very well done; it is very well presented and it tastes amazing to boot. I really liked having a side of gravy, rather than having my meal smothered in it. It allowed me to taste everything and add as much, or as little, gravy as I saw fit.

I have been to The Cat three times now, and it just seems to get better every time. The Cheshire Cat hosts "guest taps", which change frequently and feature some very tasty beer. The Spearhead Moroccan Brown, for example, was a guest. The latest guest taps are Great Lakes Brewery's Devil's Pale Ale, and Stiegl's Grapefruit Radler. I had a Devil's Pale Ale to start, while my wonderful girlfriend had a Radler. The Devil's Pale Ale looked much darker on tap than I remember it being in a can, although I haven't had it in a year or so, so it is possible that the recipe has changed. I had a Tetley's with my meal this time, which was the Elk, Ale and Mushroom pie with mashed potatoes. Tetley's cream ale is nothing to write home about, but the food sure is! The Cat uses Kichesippi's 1855 Dark Ale  in their Elk pie, which enhances the gravy's flavour.

Now I come to the "areas of improvement" segment of this post. Really there is only one: the lack of a stout other than Guinness. I do enjoy Guinness, but I think having an alternative would be beneficial, especially to a small place that touts some pretty interesting brews. Mill Street's Cobblestone Stout is very nice - a bit sweeter than Guinness - and tastes great with game meat such as Elk, and I think it would be an excellent pair with the Hot Beef and Yorkie Platter. Food for thought...

The Cheshire Cat is an amazing spot. The friendly atmosphere and great serving staff are outstanding. We were given samplers from the new guest taps when we came in, as we were having trouble deciding which beer to order, and when we inquired about the pumpkins sitting out back, the owner brought one out for us, free of charge. When you throw in some delicious food and beer at a great price, this is a place that's pretty tough to beat. I'll definitely be eating there again (and again...)

I was wandering through a local LCBO (Ontario liquor store), and I found a couple new brews from the oldest brewery in the world: Weihenstaphan. What did I find? The Weihenstephaner Hefeweissebier Dunkel and Weihenstephaner Vitus Weizenbock. I've never had a Weizenbock before, so I'm pretty excited about it. Unfortunately, I won't be having it tonight. Tonight is all about the Hefeweissbier Dunkel. 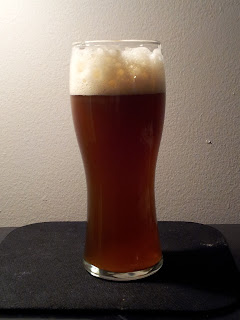 First of all, the beer pours beautifully. This beer is a nice, light brown colour. Very cloudy with a white, rocky head, a characteristic of a Bavarian style Hefeweissbier, and comes from the wheat malt used in the brew. The cloudiness comes from the yeast (or 'hefe' in German). Part of the brewing process is to filter out the yeast, which stops (or slows) fermentation, and adds clarity to the beer. In the case of a Hefeweissbier, the yeast is not completely filtered out. This also creates a phenomenon called "bottle conditioning", which is the process of further fermentation in the bottle. This helps create a higher alcohol content in the beer, and leaves it cloudy. This beer rings in at 5.3% ABV, but since it is not fresh off the shelf, it may actually be higher due to bottle conditioning.

The stereotypical Weissbier has a nose consisting primarily of banana, bubblegum and cloves, and this brew definitely stays in character. As it is a Dunkel, however, there is also a hint of burnt sugar (caramel), and some dried apricot added to the mix. Darker beers use darker malt, which translates into more of a caramel, sometimes toasty essence. In this case there is definitely some caramel on the nose. I also smell buckwheat honey and a boozy aroma. The actual yeast, or biscuit smell rounds things out. Overall the scent is quite intoxicating. Get it? 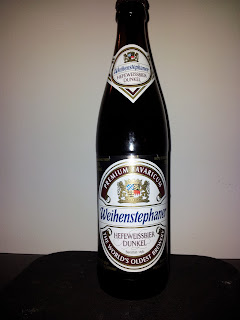 Tasting this beer, I get a full repeat of the nose. The banana and bubblegum are predominant, while the caramel, apricot and honey follow closely. The finish is largely boozy, with some banana and biscuit as well. This beer is quite enjoyable. I would say it's a good beer to help somebody transition from the hot weather (where a good Hefeweissbier will never go amiss), and prepare for a the cold weather, where darker brews with higher alcohol reign supreme... in my mind at least.

This beer would pair well with some nice aged cheese and chutney. Speaking of chutney, I found a nice pork roast in the fridge, coated with my girlfriend's home made chutney. This was an amazing pair with this Dunkel. As there are also some darker characteristics in this beer, some nice brazed ribs would also pair well.

Alas, my pint is finished, so I guess I should be calling it a night. Until next time, if you see the glass as half empty, fill it up!

How Box Steam Brewery's Funnel Blower Porter had me at "hello"

I have decided to re-create this blog from scratch (hence the minimalist template), and I could not imagine a better way to kick-off than by sampling Box Steam Brewery's Funnel Blower Porter (see picture). 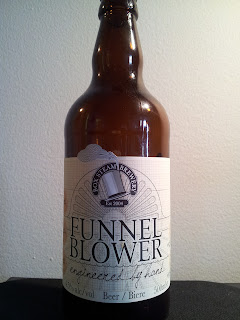 It is fast approaching Winter (it snowed here in Ottawa today!), and this is the perfect time of year to fall in love with your favourite Porter all over again. Well, I can't say that this is my tried, tested and true favourite Porter, but it is growing on me fast.

The description of the beer on the label is intriguing; "bitterness of roasted barley and malts with a subtle vanilla sweetness". The label itself is very elegant. Artsy, yet with  precise curves and lines on a graph-like background to appeal to the math geek in me.

As for the beer itself, it has a thick, ebony hue, barely translucent when held up to a light. Just from looking at it I would say it is very rich, with its creamy, white head bringing to mind whipped cream topping a dark chocolate mousse.

So far, the Funnel Blower Porter has proven to be quite aesthetically pleasing, but this brew is so much more. The nose on this Porter is sweet enough to make one reminisce back to the days of yore, hanging around in the kitchen while mom and grandma bake goodies for the holidays. The first scent I pick up is mainly vanilla, with a hint of toffee. Much like a vanilla cake coated with a melted toffee or butterscotch topping. Another sniff brings out some roasted malts (which bring a somewhat chocolatey, slightly coffee-esque scent). I am also sensing a very subtle hint of  berry. Possibly cranberry, but as I said, extremely subtle.

Upon first taste, I get a lot of malt bitterness, but as the label states, the vanilla sweetness counterbalances the malts, the result of which is almost too tasty for words. Almost. Nearly every flavour that I could smell, I can taste. Save for the berries. Dark chocolate is a dominant element upon first taste, which is derived from the malt bitterness. The vanilla is not as prominent as it was in the nose, but that is all for the better, as it does not upstage any of the other flavours. Instead of berries, I get more of a dried stone fruit note, probably apricot. The finish on this beer isn't as long as I thought it would be, I would say medium length. As for flavour, the malt bitterness is quite prominent, again with a hint of vanilla to create a nice finish. Calling this an aftertaste would be a travesty.

This is a very creamy brew, medium-bodied with very little hops and a medium malt content. I'm willing to bet that this beer would go well with vanilla ice cream, or a nice warm brownie. You could also try a cheese that's a little on the nutty side. Although it wasn't a bad pair, it definitely did take away from the wonderful chocolate/vanilla combo that I experienced in the initial tasting. But with a rich, chocolatey dessert, you will likely come out a winner. To be quite honest, you will do quite well just drinking the beer!

Now, about the brewery. There are six different offerings, according to the Web site (http://www.boxsteambrewery.co.uk):
I would recommend checking out their Web site and, if you're near Holt in Britain, check out the brewery! You can get more info about their beers and brewery at their Web site. I'm hoping to get to that area of the world (from Ontario, Canada) in the next year, and do a tour of their brewery and  their two pubs (http://www.boxsteambrewery.co.uk/our-pubs/). Personally, I can't wait to find another Box Steam Brewery here in my section of Ontario.