The end of August held two big milestones for me: my thirtieth birthday and my first trip to the U.S. of A for a craft beer run.

It was decided that we should take a road trip for some great craft beer in celebration of my latest milestone. Initially we decided that Dogfish Head would be the place to go, but we didn't realize that brewery tours fill up a couple of months in advance. So, with Dogfish Head out (for now), we decided that the next best spot would be Burlington, Vermont. Vermont is a nice, short drive, and after checking out the Vermont Brewers' Association, I saw that there were four breweries in the area. So, we packed up the car and headed south (and east)!

First of all, the drive is beautiful. We drove through Quebec near Montreal, and there was a pretty short lineup to get over the border. From there, we had only an hour and a half to drive until we hit the beautiful town of Burlington. Right on the shore of Lake Champlain, Burlington is a small town rich in military history and craft breweries.

We started out at a small spot called The Scuffers for breakfast. It was not quite 11:00am, so I wasn’t sure if they would be serving beer yet. I asked our server (named Steven, very helpful dude) when they start serving and was pleasantly shocked to learn that they serve beer from 6:00am until 2:00am! What a great concept! I started out with a Switchback Ale, by Switchback Brewing Co., while my travel partner had a Mountain Ale by The Shed Brewery. Breakfast was OK, but not great. The beer, however, was. Switchback Ale was a decent brew, a pretty straight-forward malty beer. It was a good breakfast beer, for sure. I love - and may be in love with – The Shed’s Mountain Ale, though. It is a beautiful dark ale, with great malt and dried stone fruit flavours. Unfortunately I didn’t get to see the brewery, but there is always next time! 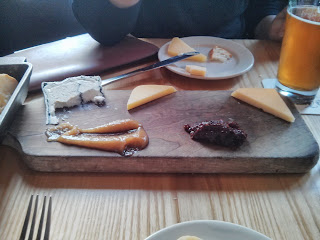 After breakfast, we just bummed around the town for a bit while waiting for check-in time at our hotel. There are a lot of cool little shops and kiosks in the Church Street Marketplace; a small area of the town reminiscent of Sparks Street in Ottawa.

At lunch time we hit up the Farmhouse Tap & Grill for some beer and cheese. I would be overjoyed if I could tell you that I was able to get a taste of of The Alchemist's Heady Topper, but it's not going to happen. That brew is released on Thursdays, and is generally gone before Saturday is over. Unfortunately, we got to Burlington August 25, which is a Sunday. I ended up having a Hill Farmstead Edward Pale Ale. It was amazing. Super floral on the nose with pine and citrus flavour. We also tried some delicious Vermont cow and goat cheese. The Farmhouse Taproom wasn't open, so I didn't get into much beer tasting.

After check-in, we took a bit of rest and decided to head out and find a Co-Op that our friend Steven had told us about at breakfast. Apparently there is a great beer selection at said Co-Op. Located at the intersection of Bank and South Winooski, this Co-Op had a pretty cool natural food selection, and buried deep in the centre, there was a glorious beer and wine section. The wine section was actually significantly bigger than the beer section, but that's okay. I picked up a few good brews. Sierra Nevada's Tumbler Autumn Ale, Dogfish Head Brewing Midas Touch, The Shed Mountain Ale, Stone Brewing Ruination, and a Northshire Brewery Chocolate Stout were what I brought home. I haven't tried them all yet, but I know that the first three listed are delicious. I sampled the Dogfish, Sierra Nevada and Shed beers whilst watching Bad Ink, and had a nap. Driving is a tiresome job. As a sidenote, I left my keys in the car, with my bottle opener. Being lazy, I searched through my bag for a potential opener. It turns out that the clutch from a hi-hat, if adjusted properly, is a great bottle opener. You're welcome. 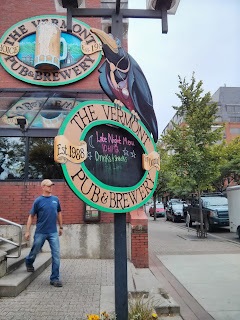 We got up and at 'em around 6:30, just in time for dinner. We went to the Vermont Pub & Brewery for dinner, where we had an assortment of spud skins and calamari to start, and I had a delicious pulled pork pie as a main. We grabbed a flight of beers to sample, and the Burly Irish Ale was my favourite, and Beetlejuice was a delicious wheat ale. From there I had a pint of cask Burly ale, and then a Dogbite bitter, their ESB. We spent most of the night drinking at the Vermont Pub & Brewery, were lucky enough to witness a young-love domestic dispute, and then went back to our room to continue the Bad Ink marathon.

I woke up the next morning as a fresh young 30 year-old, and we had breakfast at an amazing little spot called The Skinny Pancake. I had a Noah's Ark special, which consists of two eggs, two slices of bacon, and two crepes (get it? Two of everything, like Noah's Ark!). I also added two sausage into the mix. It was a very tasty breakfast.

After getting fueled up, we decided to check out a few more of the shops at the Church Street Market. We walked around for a half-hour or so, and decided we were thirsty again. This time, we headed to Zero Gravity Brewing, where we sat at the bar and sampled some of their wares. They brew a delicious black IPA, and a stout (which I had on tap and cask), among plenty of other beers. I took a picture of their tap list, but that was the only picture that didn't turn out. Fail. When they get their new site up, or I get back to sample more of their beer, I will ensure that I record the tap names!

Another stop we made was to Guild Fine Meats on St. Paul Street. We picked up a couple of local ciders, and a Sour Stout by The Bruery named Tart of Darkness. I haven't tried it yet, but I am very excited for it! Well, it was almost time to go home, and we had one last stop to make: Magic Hat Brewery. I have to say, the experience wasn't fantastic. I'm not sure if it was just a Monday and people were feeling grumpy, or if they just didn't want to talk about their beers. The samples were poured without a word, nobody asked if we liked the beer or not, and the bartenders seemed impatient if we took a moment to decide what we wanted to drink. The beer itself is good, and I picked up a couple of bottles and a fridge magnet for good measure. I just wish that the people had lived up to the atmosphere. Inside the main entrance, I was reminded of Zaphod Beeblebrox in the Byward Market (Ottawa), but without the super energetic vibe.

We did a walkthrough on our own, as there were no brewery tours for a couple of hours. The brewery is pretty cool, from the rusty old lookout tower at the front to the displays throughout the walkthrough. Would I go back again? Yes. I think that now that I know the brewery tour hours, I would go when there is a scheduled tour and see if the people are different. Everybody gets one.

Overall, I think that Burlington is a beautiful place. I highly recommend it to anyone who is looking for a beautiful getaway spot that is super close to home. I look forward to returning for a longer stay, so that I might be able to spend more time in the pubs and tap houses in the area. I would also be pretty stoked to go out on the lake for a quick cruise to see if I could see Champ!