I am writing to you a happy man, for tonight I have in my possession a growler of Broadhead Brewery's Victory Brown Ale, their winter seasonal. I first tasted Broadhead Beer when I had my first dinner at The Cheshire Cat Pub, where I was intrigued by their Long Shot White beer. I had a chance to try them out again when I traveled to Toronto to visit a buddy for his birthday. I decided that I should bring along some craft brew from Ottawa as a gift, and Broadhead was still a relative unknown for me, so I decided to check them out. I grabbed growlers of the Dark Horse Stout and Grindstone Amber, and that was the best decision I've made in a while. Anyway...

I went back to the Broadhead brewery today and picked up a couple more growlers: Backbone Standard Ale and the holiday seasonal Victory Brown. And that brings us to this very moment.

This beer has a rich brown colour and a frothy, cream coloured head. Cold weather is prime time for dark beers, and this brew definitely qualifies. On the nose, this beer presents a very chocolaty front, with nutty undertones. There are also some elements of coffee and tobacco tucked away in there; characteristics of the roasted malts used in this beer. At 5.0% ABV, this beer is pretty status quo, which is actually a good thing for a holiday beer. Generally winter seasonals have higher alcohol content for the warming effect. I like the idea of a sessionable, lower alcohol winter ale because you can drink way more of it without forgetting about your holiday. 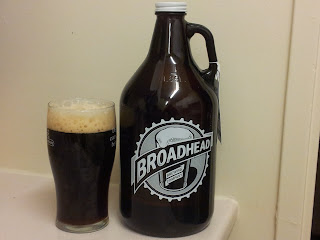 On the palate, this beer holds no surprises (not a bad thing). The rich, chocolaty taste is the first to show itself, and the finish is predominantly nutty with some malt bitterness. It's a great progression from start to finish. There isn't much of a hop presence in this beer, but that is to be expected, as it is a brown ale, which generally means malt-driven rather than hop domination. This medium to light bodied brew has a nice, creamy mouthfeel as well.

When it comes to food pairing, I had some delicious Kerrygold Dubliner cheese kicking around, so I ate some of that with a pint, and it was a pretty good pair. Definitely contrasting, but still tasty. It actually brought out the coffee/tobacco flavours in the beer, and the mild carbonation was great at scrubbing the cheese off the palate. I also had some christmas chocolates that my girlfriend brought home, which resulted in a very nutty pair. Excellent. I would say that some chocolate cheesecake would be a great pair as well. If you're going to have this beer with a meal, I would suggest a nicely grilled steak, or a roast of beef. Mashed potatoes and gravy on the side, of course! While you're at it, you may as well add some of the beer to the steak marinade and gravy. I doubt you would be disappointed.

Well, it's almost midnight, and I should probably hit the hay. Christmas shopping tomorrow!